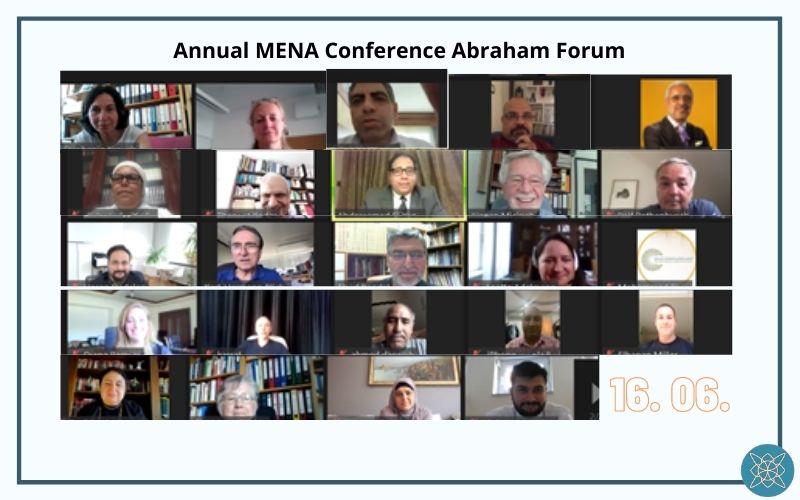 During the first conference of the Abraham Forum in MENA-Countries, the Christian theologian Dr. Tharwat Kades, who is originally from Egypt, was elected chairman. Rabbi Ehud Bandel from Jerusalem, former chairman of the International Abrahamic Forum of the ICCJ, became secretary general. Dr. Mongia Nefzi Souahi from the Ez-Zitouna University in Tunisia became member of the board.

Management duties have been assigned to Abdassamad El Yazidi, a native of Morocco, who is the Secretary General of the Central Council of Muslims in Germany. The digital conference took place on June 16, 2021 and was attended by 35 participants from 9 countries. It was the first conference after the founding of the Abraham Forum in MENA-Countries on November 19, 2020. (MENA: Middle East and North-Africa).

A policy contribution by theologian Prof. Dr. Karl-Josef Kuschel from Tübingen on the effects of Abrahamic spirituality on politics and society, was followed by reports on Abrahamic cooperation in Egypt, Israel, Lebanon, Morocco, Palestine, Tunisia, and the United Arab Emirates. Ambassador Dr. Volker Berresheim of the Foreign Office of the Federal Republic of Germany pointed out at the opening that interreligious cooperation can offer an important contribution to peace. Secretary General of The World Muslim Communities Council, Dr. Mohammed Bechari from Abu Dhabi emphasized the willingness to further support interfaith cooperation.

During the founding phase, organizational tasks will continue to be overseen by the Abrahamic Forum in Germany.”The Abraham Forum in MENA-countries is now shaped by people from MENA countries and is ready to work. In these countries, debates on Abrahamic cooperation have a high value and can contribute to a strengthening of peaceful coexistence in the long term” – this was emphasized by Dr. Jürgen Micksch, the Executive Director of the Abrahamic Forum in Germany, who was the host of this conference.

The conference was sponsored by the Foreign Office of the Federal Republic of Germany and the World Council of Muslim Societies in the United Arab Emirates.