The aim of the project is the reduction of tensions and conflicts between Jews, Christians and Muslims in Mediterranean countries such as Egypt, Israel, Morocco and others.

In 2014, the Protestant minister Prof. Dr. Tharwat Kadesh from Cairo contacted the Abrahamic Forum and asked if it is possible to set up events with Abrahamic Religious Teams in Egypt. Since he is well connected with religious institutions in Cairo such as the Coptic Church (up to the Patriarch), various Muslim institutions and governmental agencies and is familiar with the concept of Abrahamic Teams in Germany, he holds the necessary requirements to establish the project in Egypt.

Also in 2014 Rabbi Ehud Bandel from Jerusalem got to know the project with Abrahamic Teams and asked to support this idea in Israel. Ehud Bandel is vice president of the International Council of Christians and Jews, and is well connected to Muslims and Christians in Israel. He started this project in 2016 which is now organized by Rabbi Nava Hefetz of the Rabbis for Human Rights in Israel with many events.

In the meantime there was one event held in Morocco. The Abrahamic Forum is open to support other countries in establishing Abrahamic Teams as well.

Target group: Participants are usually pupils and students aged 14 to 30 years of age. Also parents, teachers, religious communities, employees of the police or military and others in Israel, Egypt and other countries of the southern Mediterranean can join. The choice is mainly determined by those who are willing to invite an Abrahamic or Religious Team.

Project Construction: Since 2016 the Abrahamic Forum finances about 10 events in Egypt and in Israel every year. There are also financial funds available to finance models in other countries. In Germany, the Abrahamic Forum contributes up to 500 euros per event for professional fees, travel expenses, preparation and rework.

Consultations:  In July 2017 an exchange on interreligious encounters was held in Bonn/Germany. From October 2nd to October 4th 2018 there will be an exchange in Cairo/Egypt. The summit of this exchange will be the opening of the International Academy for Dialogue in Cairo on October 4th 2018. Muslims, Christians and Jews will be prepared there to work together as Abrahamic Teams especially in schools. Interested people are welcome to join the exchange and the opening of the Academy.

Sponsored by the Alliance Cultural Foundation, the Robert Bosch Foundation and Bread for the World.

To view this site in German, please click here.

Site by Site against Racism

You will find here the virtual lecture  organized by The World Muslim Communities Council, in which Mr. Abdassamad El-Yazidi, Secretary General of the Supreme Council of Muslims in Germany, and Dr. Jürgen Micksch, Director of the Ibrahimi Forum in Germany, spoke via...

END_OF_DOCUMENT_TOKEN_TO_BE_REPLACED 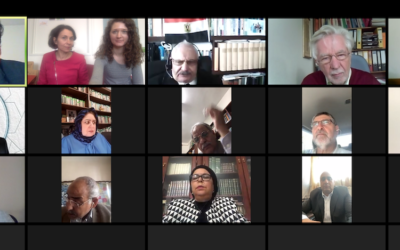 To expand peace in the Middle East, a separate Abraham Forum was founded on Thursday, November 19, 2020. At a digital conference, 40 personalities from Egypt, Germany, Israel, Morocco, Tunisia and the United Arab Emirates exchanged their experiences with...

END_OF_DOCUMENT_TOKEN_TO_BE_REPLACED

Press Release: States are interested in terror – The peace work is neglected

"States are interested in violence and terror. The dialogue and peace work of religious communities is neglected "- emphasized the participants in the international exchange meeting of Abrahamic teams in Mediterranean countries from 4-7. November 2019 in Rabat /...